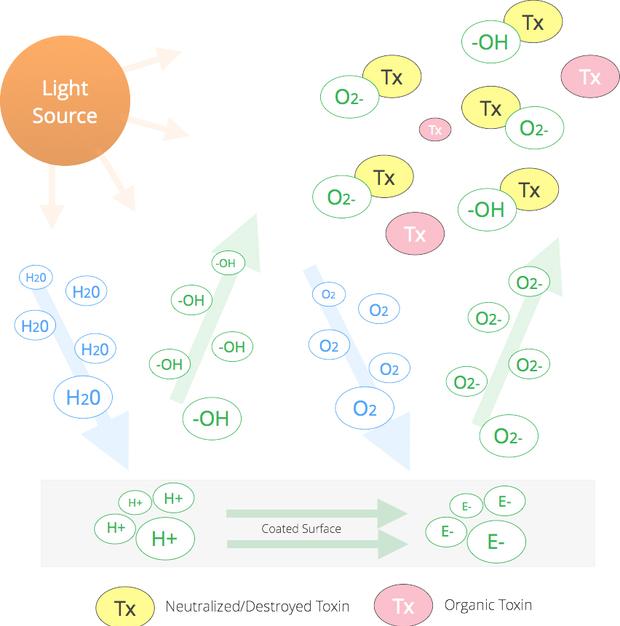 42TEK has developed and patented a production process for the highest quality photocatalytic nanomaterials.

There are no byproducts, it is a long-term repeatable process and any surfaces coated with it are sterile and self-cleaning.

In addition, Nano-TiO2 is also an efficient absorber of inorganic media, and is used to remove, isolate, or recover dissolved metals such as Arsenic (As), and other harmful or desired species from contaminated volumes of water, etc.

*Nano-TiO2 is just one example as there are several oxides that can be refined to be photo catalytic depending on the specific applications desired.

1) Nano-TiO2 can be applied to the surface of any material: plastic, cement, metal, etc.

2) When light of the proper wavelength comes into contact with the photocatalyst surface, in this case Nano-TiO2, it triggers the photocatalytic process, generating two types of reactants.

3) The reactants, ionized oxygen and hydrogen molecules (OH and O2- radicals), bond with toxins, at the molecular level, in the surrounding area.

4) By bonding with the toxins, the Nano-TiO2 decomposes toxic organic substances through oxidation.

In essence, any light (visible, UV, fluorescent) that comes in contact with these photocatalytic nanomaterials acts as a catalyst and generates ionized oxygen and hydrogen molecules. These molecules bond with surrounding toxins, isolate and remove them.

Because of this, photocatalytic nano-materials are extremely effective at purifying pollutants found in water, air, and soil by removing viruses, spores and bacteria, as well as adsorbing heavy metals and chemicals.

One such nano material that 42TEK is deeply invested in is Nano TiO2 since it can be produced in various nano forms to exhibit various beneficial properties.

WHAT ARE PHOTOCATALYTIC NANOMATERIALS?

WHAT ARE PHOTOCATALYTIC NANOMATERIALS?

​In layperson’s terms, a photocatalytic process is a chemical reaction that occurs when photocatalytic material is exposed to light. Anyone familiar with plants has heard of chlorophyll, probably the best known photocatalyst, which turns natural sunlight into energy for a plant.

Researchers and academics have known for decades that when certain elements are synthesized down to a nano level, (nano materials), they take on faceted crystalline structures that exhibit extremely powerful photocatalytic properties.

42TEK Founders Reyes Rodriguez and Tony Diego in the lab.